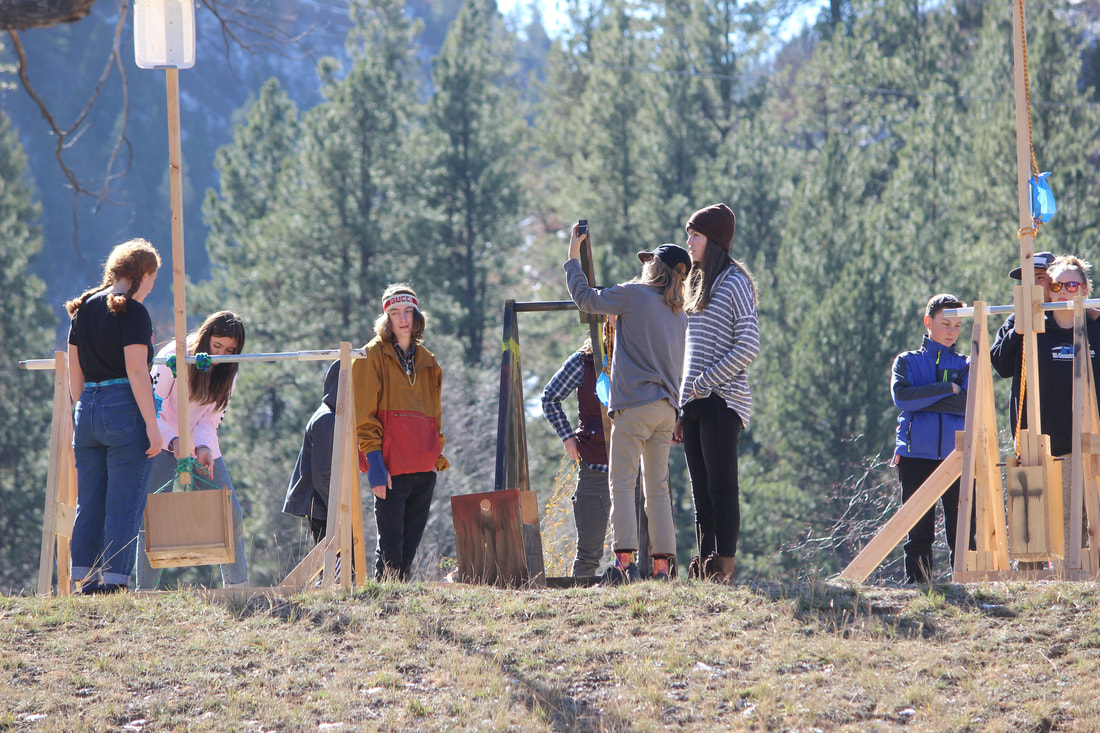 The purpose of this project was to understand the physics of a trebuchet. We started by studying what a trebuchet is and how it is different than a catapult. Then we created a prototype with our group. Once we completed the prototype, we designed our final product from what we learned from the prototype. Our group was the only one in our class to use the trebuchet optimizer that Tina gave us. I did a lot of research to find the right proportions for the trebuchet because that was very important. Once we felt that we had the optimal trebuchet, we started building. The first test of our trebuchet went quite well except for the sling not working.
​
To get the maximum range out of a counterweight trebuchet, you have to consider many things. The main thing that helped us was getting the proportions right. The ratio for the arm should be 5:1. This means that the projectile arm or long arm should be five times the length of the counterweight arm. We also found that the counterweight should be 34 times the weight of a projectile if that projectile is around 1 pound. We could not quite make this happen because our frame and arm would not be strong enough to make that happen.
To maximize the potential energy, you need to make sure that you have the right amount of weight in your counterweight. Then you need to raise the counterweight into the air. The higher that it is, the more potential energy the arm has. To create kinetic energy, you release the arm when the counterweight is at the ideal height. To maximize the kinetic energy you want the counterweight to fall straight down. What we did to help with this was make a counterweight that rotated around the arm. If you had a perfect situation, your trebuchet would have wheels. When the counterweight falls, the trebuchet moves just a little bit, and because of that, the counterweight falls in a straighter and more vertical line. To make projectile motion, you need to take the potential energy that is stored when the counterweight is in the air. If the arm does not have a sling, you have projectile motion but having a sling helps increase the velocity of the projectile. The sling kind of acts like a longer arm without adding the weight of a bigger arm. Because of the sling, the projectile accelerates much faster.
To be a community of learners you need many 21st century skills. In an ideal situation, your group can collaborate, communicate, think critically, and be creative. If you can communicate with your peers, you can run ideas by them to see if they will work. Collaboration can help so much because you can work together to make better ideas because you have more people to help. During this project, I used collaboration a lot because my group would come up with a plan together. This works better than just coming up with it on your own because the whole group can put their ideas in and makes a much better final product.
Critical thinking is such an important thing that you need to practice when you come up with an idea. The first one is usually not the best. If you think about it critically, you can refine that idea and make it much better. You have to think creatively on this project because there's no one way to build a trebuchet. You have to be creative to come up with ideas to solve holes in your design.

The most challenging thing on this project was working with my group. I had trouble in this group because I a natural leader and I had other leaders in our project group. Once we got past that and established a leader, for the most part, we could get to work. It was still hard to work together because I had the most knowledge about constructing our trebuchet. I struggled with trying to do the project on my own and not allowing my group members to help. Once I realized that I could start to assign people to work on different components. Toward the end, we got better at working together. When we were setting up our trebuchet, we had a little malfunction, and we worked great together to get it back in operating condition fast.

My biggest strength that I brought to my group is my knowledge of woodworking. I was able to identify what types of wood we would need to make our trebuchet the strongest.  Other groups used scrap wood, and that led to weak and poorly constructed trebuchets. It was very apparent in the beginning that most groups did not have these skills. Their trebuchets were almost falling over because they did not use wood glue and they could not screw their screws in the right way. Our trebuchet held up virtually the whole time when others had to be continuously repaired.