For this project we did a model UN conference. We studied how the UN works and what they do. We then studied the Venezuelan refuge crisis. Finally we debated over way to solve the crisis. 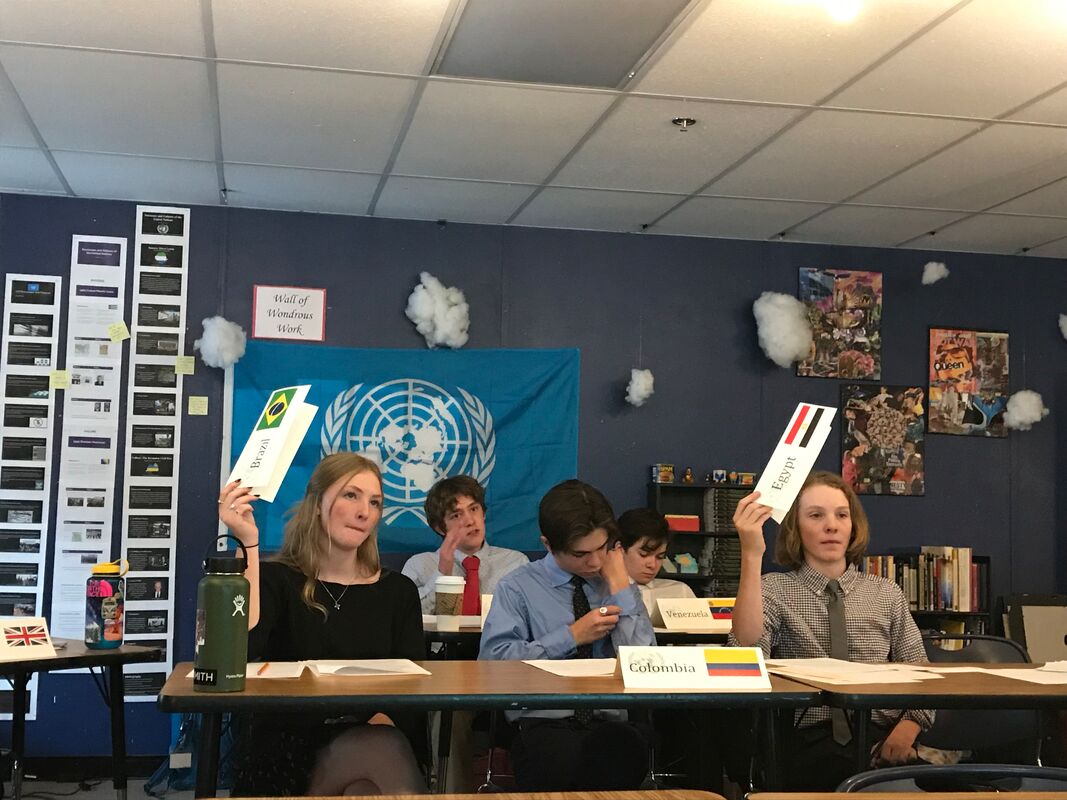 Shaw Kassay
Lori Fisher
Humanities 10
13 November 2019
Although Venezuela has an ongoing humanitarian crisis the United States gone to many lengths to help them with no positive response.

At one point in time, Venezuela was considered the richest country in Latin America. In the past years that has changed dramatically. Venezuela has quickly become a country with a large crisis. Upwards of 5000 people are leaving the country every day because of a lack of resources (Reid). The citizens are not supplied with enough supplies to sustain themselves or even a family. 80% of household food are insecure to buy (Van Praag 3). This is a major crisis for the people of Venezuela. If they do not get adequate supplies to support their household then the people are going to continue leaving at alarming rates.
Since Egypt does not have an opinion I went with our greatest ally the United States. The US has tried to help multiple times. They have offered aid to help with food shortages. After all of this Venezuela has refused all of the outside help.

After the United States trying to offer help with no response they have now taken to imposing sanctions to try and cut them off from the outside world. What we are trying to do is stop them from getting imports into their country. If they can't import outside food and resources then they hopefully with eventually have to surrender because they can't survive anymore (Taj). “We are sending a signal to third parties that want to do business with the Maduro regime: proceed with extreme caution” (Taj). The US is recognizing that the sanctions may not work. Venezuela may find ways to make or import their food and supplies to sustain the government. If this is what happens then the US recognizes that a forceful over through of the government may be the only option. While this is an option it is the last resort. Forcefull intervention in the last 120 years in Latin America has not had positive outcomes (Kinzer).

Highlight:
The highlight of the whole project was the final conference. I did not think I was going to enjoy it. I was actually kind of dreading it because of the speech that I did not do over thanksgiving. I enjoyed being able to argue but that was proper and in character. Alos my country seemed to have the same-ish opinion that I would have so it was very easy for me to argue my point with passion. I also enjoyed seeing how they would resolve problems in the actual un. The set up seemed to work very well for concluding peacefully.
Growth:
The main thing that grew over this project was knowledge. I now know all about how the UN works and what they do to resolve issues. I also know all about the crisis in Venezuela and how it is affecting their people and the countries around them. Another thing that I learned more about writing in general. We had to write lots of paper and reflections throughout the project. I now am able to start easier and get my ideas out onto the paper well and fast.
Conference Preparation:
I felt very prepared coming into the conference. I had good quality background info on my country that helped me when arguing my point. I also felt that I know exactly what I needed to know about the crisis and what was happening and why. The country research helped me with this project. The one thing that I felt underprepared was the rules of the conference. I did not know how to start talking by saying the right thing. I didn't know how the general flow of the conference would go.
Refinement:
I don't feel like I want to change much going into the second conference. I think that I could do just a bit more research on my country and some more of their allies and their opinions. I was only going off of the opinion of the united states. The one thing that I do want to research is the sanctions that the United States has on different countries. This came up a lot of times at the first conference so I thought it may be good to know for the second conference.

The Work of Adolescence
​

During this project we studied the differnt theiror on addolecents developments. Each student was tasked with interviewing a infulental person in their life about their adolecence. 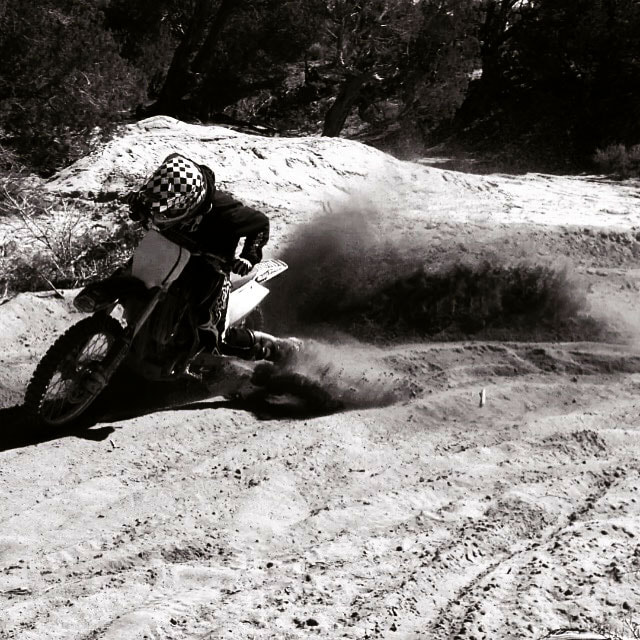 Rob Nichols
During adolescence, teens are likely to take more risks. I interviewed my bike coach Rob because I think he has a lot of interesting stories to tell about his younger years.  He wears daisy dukes on the daily, even when its cold out. He's a long skinny Italian guy. He lives with way too many people so he can pay for his bikes and rent. Just like me his life revolves around bikes. He grew up in New York, rode motorcycles and fixed lots of cars. Ever since my first practice with him I have always looked up to him, he puts a lot of work in to fund his passion. He lives the way I imagine myself living when I am grown up, just working as much as possible to fund what I enjoy doing in my free time. I chose to interview him because I wanted to see how he achieved this lifestyle.
During the interview, he talked a lot about how he would get together with his friends and work on car make them more efficient. This lead to one thing, driving his car really fast, as fast as possible. At the time he did not see any problems with this, he just drove his car fast and he enjoyed that. He did not realize the fact that he was putting himself and others in extreme risk of death or injury. “I don’t know if I felt like it was risky because all I wanted to do was ride my motorcycle fast and jump things”.(Rob) As you can see from this he did not understand the risks that he was taking. He just wanted to get the sensation from driving and taking risks.

I saw that this interview connected a lot to what we were studying in class. There is a point where risky behavior is a necessary evil. When adolescents take these risks, they can look back and understand that it was a mistake and not do it again. If they don't make these mistakes they can make them later in life where they may have worse consequences to themselves and others. I feel this need to separate from my parents in my life right now. I am about to get my license and this is going to distance me even more. I think this is a good thing. My parents, not so much.
His relationship with his dad was what really made him think about how these actions could affect other people other than himself. He said that it was hard for him to understand that if he messed up, he would be messing up other people than just himself. A quote from the book Brainstorm says this very well. “When an adolescent gazelle runs up close to a cheetah to inspect its potential predator is risking its own life, not the life of its fellow gazelles, adolescents or adults.” This is what Rob thought he was doing but in reality he was also pulling the rest of his fellow gazels with him. Therefore also putting them in danger. His dad helped him to understand the benefits and consequences of what he was doing. He started to realize that maybe it wasn't worth it. The excitement of driving fast may not overcome the consequences of maybe crashing and maybe really messing yourself and others up. At this point he talked about distancing his life from his parents. As an adolescent, this is a natural thing for the majority of teens. They need to slowly distance himself so that when they do have to support themselves they can actually handle themselves without their parents by their side every step of the day.

After this interview, I understood that he now has a much better grasp on the pros and cons of situations. He is able to go into a situation and analyze them and see whether the risk is worth the reward. Some lessons that I took from this interview was really thing about the risk vs reward. If you can critically think about this then you will  be able to keep yourself out of situations that you really don't want to be in. Risk taking is a very necessary evil, even if you need to take these risks there is a responsible way to do it.

When I first wrote my interview right up I was not proud of it at all. Then about halfway through the exhibition my mom came up to me and said that that was some of the best writing she had seen from me. My first reaction was no that can't be possible then I realized how much effort I had put into the writing. I had rewritten many parts of this essay. The grammar and flow of it I had put lots of effort into getting the best I could. Once I realized that I was proud of this it was a nice surprise because all the effort that I put into paid off.

The most difficult thing on this project was getting enough information out of an interview that I thought did not go very well. When I first finished the interview I thought that I had lots of good information I could use. When we started to write out write up I realize that the interview was very surface level. To deal with this I inferred a lot of the information based on what I had already known about rob. Next time it would have been beneficial for me to redo my interview when I had the time.

The most important thing I learned over this project was the ability to evaluate risk vs reward. I also learned the importance of risk-taking at this stage in life. It is important to take risks and learn from them to help you understand your future and what to do in life and what not to do. This connected to my final project because it was the main theme I found in the interview.

For the start of the semester, I feel like I deserve a nine. I feel that I am always on time for class. When I enter I listen to Lori or look at the board to see if we have a starter or not. I think that I am very good at using my class time wisely. For example, I was very surprised at how far ahead I was on my project. This was because I have had trouble using my class time wisely in the past and have gotten much better. Usually, I am not engaged in humanities but this year I feel that I am most interested in this class. I feel that I participate in class because I am interested. I think that most of the time I listen to the teacher and my peers. At the beginning of the year, this was harder for me. Now I think I am doing better at it. I still think I can improve on this by trying to stop talking to my friends when the teacher is talking.