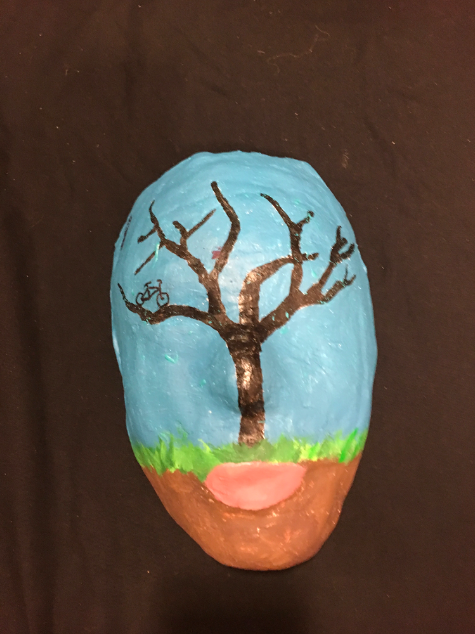 Project Description
Our final product for this projects was an essay and a mask that represented the masks we wear or how we have been socialized. To help us understand what being socialized meant we study a lot about socialization. The most impactful activity was watching the film “Mean Girls.” This movie was about a girl who moved from Africa into a high school that she had never been to. She started as just the new kid but then the group called the plastics started accepting her into their group. Throughout the movie, she changed so much as a person. She was transformed into a very mean girl who thought she was the coolest. Over the course of the year, she had been socialized into a bad girl. We also studied a movie called “Feral Children” This film showed that animals can socialize a child to act like them. The film was about a child that ran away from his parents. He began living with wolves. By the time people found him many years later, he was acting like a wolf. He walked on four legs, he growled and ate raw meat. The incredible thing was that he was virtually immune to the cold even though he did not have a fur coat like the other wolves.  Once they found him, they tried to socialize him to be human again. Since he was around wolves at a young age, they could not get him back to normal. A child is much more susceptible to socialization at a very young age. He was already past that age when the humus found him.

Project Effort
Over this project, I put myself out in the open many times. In my essay, I talked about me behind a with a middle-class male. I was able to let my readers know that this path is the easiest path in life you can have in this day. At the beginning of the project, I started to take the easy route, but I realized if I did that my work would not be the quality I wanted. At times I had lots of trouble with understanding how Stephen wanted us to write and format the essay. I talked with my mom about and got some more understanding, but I still did not understand it fully. I had Stephen look over my essay, and he told me what I needed to make it the best. This helped a lot, but I am still confused on how the rubric was connected to the outline.  I decided not to ask him for help again because I did not have the time or energy to make significant changes to my essay. I was also proud of what I had. It also seemed that Stephen wanted me to write my essay differently then what the outline said. I was able to understand the mask much easier because it was something that I enjoyed to do unlike writing an essay. The final mask that I turned in was some of my best work. I was proud of how much effort I put in and how it turned out, but the essay not so much. I felt like I could not write about what I wanted because I had to follow a very confusing outline. I started with writing the essay in the wrong way, and from there I tried to patch it up. I got it to the best I could but not what I wanted out of it. I was proud of how much effort I put in because I spent so much time refining it. I was pretty proud of the final product but not as much as I could have.

Personal Growth
This project has made me think deeper into who I am. I realized how I have been socialized to like and dislike many things. I have been socialized to want to be outside by my community friends and parents. I believe this to be a good thing because I now live to ski and bike. Our country has tried to socialize me to think people of color are lesser than me. I do not believe that people of other races are lesser than me. On the opposite side of that, my parents have socialized me to think that everyone is equal and I believe that wholeheartedly. Overall this project made me open up to who I am and who I have been shaped by socialization.

Roots
By: Shaw Kassay
Working at a coffee shop since I was 13 years has been very eye-opening for me.  I got the job in 6th grade, so I was pretty young. People asked me so many questions about how old I was and how I got the job. Every once in a while, I would get asked if I was qualified for this job, or if it was even legal.  At that age, it made sense to me that people were asking these questions because I was very young, but now that I am fifteen years old the questions keep coming. Yes I am short and I look a little younger than most, but I know that I can handle a job in customer service. It is a bit unnerving that people can still not trust me with my job simply because of my age. I feel that adults think that they can not have trust in you until you are 16. The majority of our population believes an older person is more capable of doing a job than a young person that has more experience. If adults can not see trust and respect in a kid, the kid will have trouble trusting the adults. As I have watched all of this happen to me, I have come to the realization that kids have been socialized not to be trusted in a place of responsibility. It seems that adults had been socialized to believe this as well. The people that have been coming into the shop for a long time have realized that I can do just as much as anybody else in the shop, Even though they were all skeptical of me at first., They finally realized that they were judging me on my age and not my ability to do good work. The socialization of living in the small outdoor community of Durango has shaped who I am.

In the community of Durango, Colorado, I think a person can get socialized by so many things. Socialization is the act of learning to behave and act like others in society.  I believe that the majority of it is subconscious. Just being around people in this town I can feel how I am supposed to act and what I am supposed to do. There's also the conscious socialization that the people of our community partake in.  Being a kid living in Colorado and Durango specifically I have been socialized in a good way to like the outdoors. If I had different parents that did not teach me to bike and ski, I likely wouldn't have started so young. However, I would have eventually found outdoor activities because of the subconscious push of our town participate in these types of sports. There is socialization in all communities, but I think that we have our own unique type in Durango.

Being a middle-class white male is the easiest path in our society. Having this privilege has made my life very easy. Just this year I have realized what having this social class does for people. In our sociology reading, we talked about target and agent groups.  An agent group is the group of people that do not have to worry about other people oppressing them because of age, race or gender. My whole life I have been part if the agent group. The target group are people have who have to worry about oppression against them. I never have to think about people being mean or rude to me because of my race. I have known a person of color that had gotten searched walking out of the store while they were with a white person and store clerks did not even bat an eye at the white person standing next to them. If you are a person of color, it is not uncommon to walk through public setting and have people look at you weird or say rude stuff to you. I can't imagine having to deal with this every day. The project with Stephen has helped me see that my path as a white middle-class male is an easy path.

The theme of my mask is how I have been socialized growing up in Durango. The centerpiece of the mask is a tree that is very sparse in branches. I did this to represent how simple nature is and how easy it is to love. The tree is surrounded by a lovely blue sky to represent what I think of when I think nature. The tree is growing out of the lips. I did this to help portray my connections with being outside. One one of the branches there is a bike. The primary meaning of this is to signify my love for riding my bike. On a deeper meaning, it shows how small I am when in nature even though I think I know it like the back of my hand.

During this project, I have started to think about how socialization has affected me. I am the person I am because of socialization. I have been socialized to enjoy outside because of my parents and community. Even though our community has been socialized to believe a young person is less qualified than an older person I am currently still employed and are given more responsibilities weekly.  Also, I am gaining the trust of my coworkers and customers. Socialization has been helpful in some areas of my life and hurdles in other.